I have been sitting today totally under the weather with huge hay fever. I haven’t stopped sneezing, have a blocked nose and generally feel very much under the weather. I realised that the last time I can remember having such a lousy time with hay fever was when I was waiting for my parents to … END_OF_DOCUMENT_TOKEN_TO_BE_REPLACED 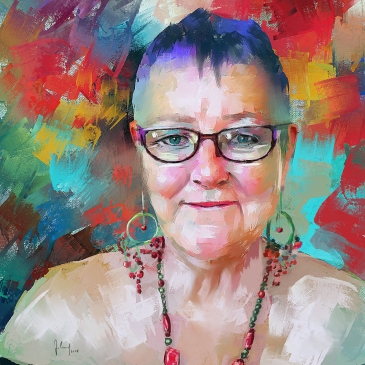 This is a digital portrait an artist friend of mine, Georg Ireland, created and gifted to me on my birthday at the end of September. It was a lovely surprise and I’m going to get it printed and framed.

I created this after watching a video of Gina Hatzis with a link to her work below. I hope you enjoy it as much as I did.

I’ve been absent from this blog for quite a while because, as you’ll notice from the new title, back in Spring I got a diagnosis of Stage 3 endometrial cancer.  Not exactly the cheeriest news to get and, after some consideration, I decided not to follow the route of hysterectomy, chemotherapy and radiation. The gynaecologist … END_OF_DOCUMENT_TOKEN_TO_BE_REPLACED

25th April is Anzac Day in Australia. It commemorates the  26,111 Australian casualties, including 8,141 deaths, when young men were sent to their deaths in the Gallipoli campaign of World War 1, along with forces from New Zealand, the start of the Anzac tradition. This figure doesn’t include those who lost their lives from other … END_OF_DOCUMENT_TOKEN_TO_BE_REPLACED

Do not go gentle into that good night. Rage, rage against the dying of the light. Today, my friends, I want to present the modern-day Yellow Brick Road – Yellow for Cowardice; Brick for Stupidity and Road … well, more like a trail in the sky of missiles hitting Syria and possibly paving the way … END_OF_DOCUMENT_TOKEN_TO_BE_REPLACED

DANCES WITH CANCER
Powered by WordPress.com.