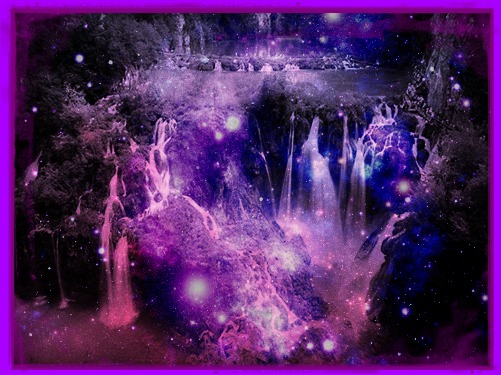 The image above is of waterfalls, relating to emotions, and the galaxy, relating to the galactic web which unites us all in the bright songlines of shared, common humanity.

This post arose from seeing a photo of golliwog biscuits claiming it was okay to like this image, and bugger being political correct. But it’s not okay. Golliwogs arose from books by Florence Upton in the late 1800s when slavery operated in the US, with the image typically of black skin, eyes rimmed in white, clown lips and frizzy hair. In the UK it was used by the jam manufacturer, Robertson’s, and I remember collecting golliwog stickers and brooches as a kid. But the image is a stereotypical one of black people and the derivative “wog” was used as an insult to black people.

I quite often see posts or comments sneering at “political correctness” and, while I’m quite willing to accept that sometimes it’s over the top, on the whole I’ve noticed that, while some use offensive language without realising its history, all too often those who object to the term really mean that they want to live in the past where it was okay to make rude and rancorous comments about black people, Jewish people, women, LGBT people, fat people, short people, shy kids, kids with glasses, nerds, anyone who doesn’t fit into the white, patriarchal mores of the past.

It came from a time when, in the UK, it was okay to put signs in boarding house and shop windows: “Blacks, Jews and Irish need not apply”. And we all know the history of racism in the US, with the KKK, lynchings, murders of black people, Jim Crow and so on. Now we get Islamic people going about their peaceful business being called “terrorists” or, in the case of Donald Trump, threatening Muslims with incarceration, badges and banned from entry to the US.

Women who stand up for women’s rights are abused, bullied and threatened with rape, violence and murder along with disgustingly offensive language. In States in the US there is legislation allowing for the victimisation of LGBT people and those in mixed-race marriages. If you object, you’re accused of being politically correct, but sod that, it’s fundamentally about insisting on polite language and respect.

Just as it’s not okay to portray Jewish people as hook-nosed, greedy, world-dominating financiers, it’s not okay to use racist images of black people, use derogatory language for LGBT people, demonise refugees and asylum seekers, abuse Muslim people and so on. Too often this filters down into schools and the playground where bullying then becomes the norm.

Yes, it is a pain in the arse to have to change attitude, but the world turns, what was once acceptable isn’t any more, new society arises as it has throughout the history of the world’s development.

All that is being asked is that people are polite, respectful of differences and are courteous to people because, when you strip away colour, shape, religion and sexual preferences, under the skin we are all the same.  It comes down to that old adage: “Treat your neighbour as you would like to be treated”.